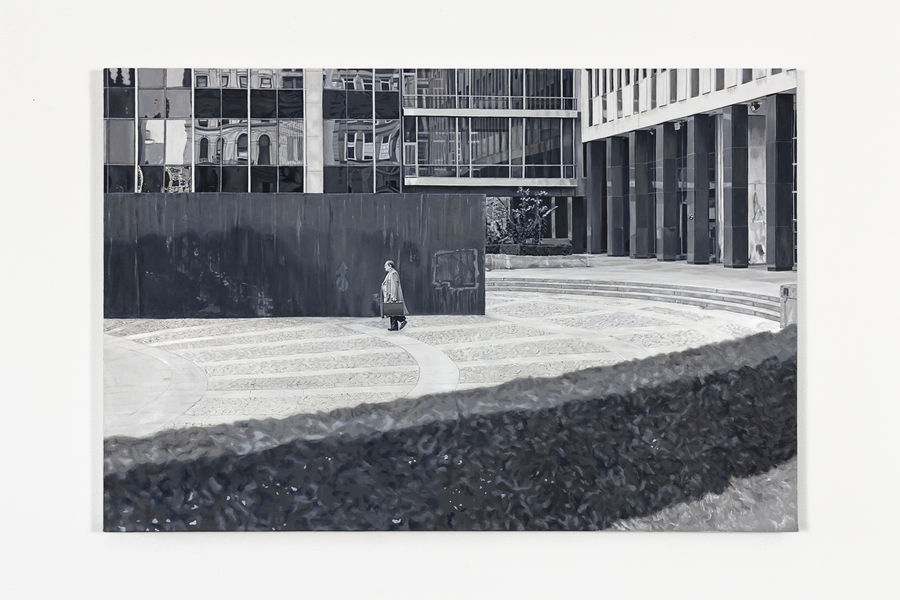 K: Do you remember the first time you encountered Tilted Arc?

T: I walked past it as I was going downtown for some reason. I might have needed some official documents from a government agency.

K: What was your first impression?

T: The first time I saw the sculpture I had a strong reaction to it. I felt almost giddy. I think it was the audaciousness and playful aspect of the piece that appealed to me. This was not a sculpture that one walks up to to admire. It commanded the whole plaza. Depending on where you were it was in the way or it blocked your view. Its height suggested a wall. The sculpture looked incredibly solid, yet the patina gave the impression that it might be rusting away. The overall feeling was of something from another realm -- as if it had dropped from the sky one day and embedded itself in an otherwise unremarkable plaza. Whatever it was you could not ignore it.

K: Were you familiar with Richard Serra before you encountered Tilted Arc? If so, please describe how you first learned of his work, how and what you experienced, and what you thought of it.

T: I was not familiar with Richard Serra or his artwork at the time. This was before the Internet, so it's a mystery to me how I learned about the artwork and Richard Serra. I assume I read about it in the New York Times after I was aware of the sculpture's existence.

K: Describe your life around and during the time Tilted Arc was installed.

T: I was a freshman student at The Cooper Union School of Engineering in Greenwich Village. I was a terrible student but I did graduate.

K: Why did you photograph Tilted Arc?

T: This was probably when the controversy over the sculpture was leading to calls for its destruction. I couldn't understand why people didn't like it, let alone why they would wish to have an artwork destroyed. I wanted to take pictures of people interacting with the sculpture to try to understand that.

T: I was not really photographing anything. My father was an amateur photographer and I learned about it from him, but photography was never more than a hobby for me.

K: Why are you interested in art in general?

T: I love thinking about ideas and that extends to ideas about artwork. I remember one day I picked up a copy of "Artforum" magazine and I was completely engrossed in it.

K: Why did you want a painting of Tilted Arc?

T: I've had a lingering feeling of sadness about the sculpture and its destruction. I was a young, naive person at the time just starting my career. It didn't seem possible to me that people would organize and actually succeed in having it destroyed. It made me rethink my ideas about democracy and culture. I have always wanted to do something to commemorate the piece, and the thirty-year anniversary of its destruction was approaching. I went about looking for an artist to create a painting based upon the photos.

K: What did you want from a painting of Tilted Arc?

T: The painting is a keepsake in the same way one might have a portrait made of a departed loved one. I worked with the artist to combine elements of the photos to create an idealized version of my memory of the day I took the photos. I left it up to her ultimately to choose the final composition.

T: Can you describe the process you used to create the painting?

K: I was excited by Tony’s fascination with the sculpture. Through many conversations, I tried to help him decide how he wanted a painting about the sculpture to be commissioned and what he wanted from the painting. He was considering a few different artists and a few different strategies for memorializing the sculpture. I was intrigued by the photographs Tony took of Tilted Arc and he gave me scans of the negatives. We had many conversations about the sculpture. We discussed which perspective of the piece was the most compelling, and what we thought of the content of the photographs. We played around with the compositions and collaborated on a composite image made from a few different photographs. I explored different mediums for translating the photo collage. Graphite was my initial preference, but when I learned how grisaille oil painting was historically used to portray sculptures I knew this was the perfect medium. I created two 8 x 10 inch test paintings to see how grays should be made and make sure Tony liked the way I handled the imagery. I ultimately decided to use burnt sienna, ultramarine blue, and titanium white. The grays were not batch mixed so the hue shifts throughout the painting.

K: For me, this painting is about a love of looking at art - savoring it and finding joy in people’s reactions to it as a part of their lives. There is something nicely layered about making art about another artist’s work. In painting this, I definitely fell in love with the setting of Tilted Arc - the way the geometry of the surrounding architecture melts in the windows, the texture of the stone ground, the formidable wall of bushes, and the dark and shiny columns. I feel like I can understand why Richard Serra chose this location. His sculpture extracted, embodied, and amplified the feeling of the place. Tilted Arc has lived for many years in Tony’s mind, and it was a pleasure to memorialize not just the sculpture, but also Tony’s appreciation for it, in this painting.
Commission